Your Pelvic Floor ( also referred to as PC Muscles)

The Pelvic Floor refers to the muscles that in effect support the female pelvic organs, such as the womb/uterus and bladder. If the pelvic floor becomes weak, then problems occur such as weak bladder ( often leading to incontinence ).  Or a prolapse – measured in degrees, often leading to the need for a vaginal pessary to be worn or surgery ( usually this is now performed vaginally though not always) to repair the prolapse.

The pelvic floor muscles are often described as a figure of 8 due to the way they sit in the body, you will probably have heard or seen them abbreviated to PC Muscles or Pubococcygeus. Though for a true in depth factual description of the Pelvic Floor Muscles you should read the ‘detailed version’ below.

When these muscles go into spasm it makes it painful or impossible for anything to approach, penetrate and be inside the vagina. Making intimacy and health  maintenance examination difficult or impossible. This reaction ‘spasm’ comes from deep within, and a women has no control over the spasm nor can she do anything to stop it starting or bring it to an end, she really has no option other than to allow it to continue until the spasm has ended.

How can this be avoided, what can you do?

A women can amazingly train and retrain her subconscious during the Alpha/Delta/Theta states of sleep, embedding new commands over a 21 night period, so that both body and mind effortlessly accept the new command – of instructing both the PC Muscles and the vagina to accept : approach, penetration and internal resting. It’s a simple and effortless training program – all you need to do is invest in the Vagi-Wave.

The detailed version of the Pelvic Floor

Because we have done in depth research we can surpass generalisation and tell you exactly how and what is involved with the pelvic floor.

The bony pelvis is composed of sacrum, ileum, ischium, and pubis. It is divided into the false (greater) and true (lesser) pelvis by the pelvic brim. The shape of the female bony pelvis can be classified into four broad categories: gynecoid, anthropoid, android, and platypelloid, consisting of a wide but thin muscular layer of tissue that forms the inferior border of the abdominopelvic cavity.

The pelvic ligaments are not classic ligaments but are thickenings of retroperitoneal fascia and consist primarily of blood and lymphatic vessels, nerves, and fatty connective tissue. The connective tissue is denser immediately adjacent to the lateral walls of the cervix and the vagina. The broad ligaments are a thin, mesenteric-like double reflection of peritoneum stretching from the lateral pelvic sidewalls to the uterus. Mackenrodt’s ligaments extend from the lateral aspects of the upper part of the cervix and the vagina to the pelvic wall. The uterosacral ligaments extend from the upper portion of the cervix posteriorly to the third sacral vertebra.

Three muscles : coccygeus (also referred to as ischiococcygeuys), ileococcygeus and pubococcygeus  constitute the levator ani muscle. They originate from the pectinate line of the pubic bone and the fascia of the obturator internus muscle and are inserted into the coccyx.

These muscles have also been collectively called as the ‘pubovisceralis’ muscle ; of which the terminology  ‘pubovisceral muscle’ is well accepted in the urogynecological field, however it is rarely mentioned by others. 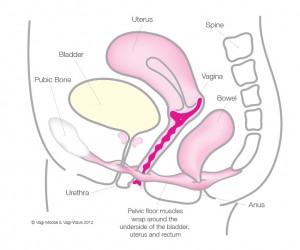 In women, the levator muscles or their supplying nerves can be damaged in pregnancy and by trauma in childbirth. Damage to the pelvic floor not only contributes to urinary incontinence but can lead to pelvic organ prolapse. Pelvic organ prolapse occurs in women when pelvic organs (e.g. the vagina, bladder, rectum, or uterus) protrude into or outside of the vagina. Surgery can be performed to repair pelvic floor muscles. The pelvic floor muscles can be strengthened by Pelvic floor exercise (PFE), however PFE generally is ineffective for urinary incontinence unless performed with biofeedback. However the thought of inserting a pelvic floor trainer into the vagina is a little daunting for most women, however this can easily be overcome by using the Vagi-Wave 21 night training program. 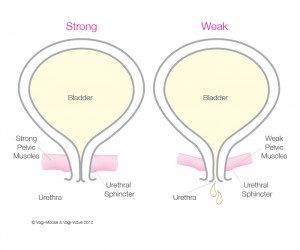 (A pelvic floor trainer we have had good feedback on is the : cordless/wireless ‘athena fem’. Note: we are not endorsing this product as there are many different types on the market and a different make maybe more suitable for your own needs/health history.)

Another way to use Vagi-Wave :

Eventually, though it may take some time and practice, you will be able to (while standing) keep your Vagi-Wave within your vagina as you utilise your pelvic floor muscles while doing your excercises.

Insert Vagi-Wave as normal, holding a mirror so you can see the Retrieval end,  flex your pelvic floor by doing a gentle pelvic floor excercise and note the movement. The greater the movement the greater strength/tone. Don’t worry if there is hardly any movement to begin with, as long as you keep working the pelvic floor you should notice an improvement when you test it again a month later.

The pelvic floor does not get excercised unless you do it !

Where can I do general pelvic floor excercises (without a pelvic floor trainer –  Vagi-Wave inserted) so nobody notices ?

► Waiting for a bus, train or at airport check in

► While using the phone, watching tv, or on your computer

► Sat at your desk at work

In fact anywhere – the possibilities are endless – so be creative.