What it Works With

Vaginismus is sometimes referred to as an imaginary  “wall” in front of  the vaginal opening as the reflex reaction continues to happen every time there is the potential for vaginal penetration (whether for pleasure or health & well being  maintenance).

Vaginismus is ageless and can creep up on you when you least expect it. With all the experiences we encounter, the information we take in, digest and worry about including our own experience of pain, health issues,intimate activity. It is no wonder that vaginismus becomes the silent foundation/building blocks to a never ending cycle of unhappiness for women whatever their age.

The muscles act rebelliously, refusing to allow entry even though the woman may truly want to consummate and receive her spouse vaginally or have a pelvic examination, smear, use a tampon, menstrual cup etc. This is extremely frustrating for her whereby this experience  becomes a fixation of negative embedded commands of which she has no control, and so the cycle continues. She no longer is in  control of her pelvic area,muscles, body and mind. For the aroused man  (read 9 : Erectile Dysfunation /Premature Ejaculation) , it is like running into a brick wall and very frustrating. 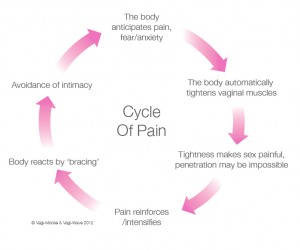 Sex is an activity involving many complex conditioned responses, where successful intercourse is learned through experience and interaction – as we remember what feels good, works, and what is not comfortable – resulting in the mind and body anticipating intercourse positively.

The process of learning how to have successful intercourse is cut short when the vaginal muscles spasm as a protective device. With the absence of any direct conscious control on the woman’s part, nerves controlling the vaginal muscles react to the anticipation of intercourse as a call to tightly constrict, brace, protect, and guard against the onset of potential penetration. She may as well hang up a  ‘No Entry’  sign because even ‘approach’ can be enough to trigger the unwanted response, let alone attempting penetration itself.

This is described as : when a woman has never at any time been able to have pain-free intercourse or any vaginal penetration.  It is commonly discovered in teenagers and women in their early twenties, as this is when many young women will initially attempt to use tampons and experience problems with tampon insertion, have some form of penetrative sex, or undergo a Pap smear (gynaecological exam).

Typically, primary vaginismus is the common cause of sexless, unconsummated marriages. The PC muscles constrict and tighten the vaginal opening making it uncomfortable or in many cases virtually impossible to gain entry. When tightened, attempts to insert anything into the vagina produce pain or discomfort. Often women who have vaginismus may not be aware of the condition but worry happily feeds the cycle of negativity and so the problem accelerates, often leaving her no longer in control of her mind, body and well being.

With secondary vaginismus a woman who has previously been able to achieve penetration suddenly finds she can’t. Here we refer to the experience of tightness pain or penetration difficulties later in life, after previously being able to have normal, pain-free intercourse/examinations. It can be triggered by medical conditions, traumatic events, relationship issues, surgery, life-changes (e.g. menopause), or for no apparent reason. Secondary vaginismus is the common culprit where there is continued ongoing sexual pain or penetration problems where there had been no problem beforehand.

It can be triggered from anything such as urinary or yeast infections, pain from delivering babies (childbirth), menopause, or previous vaginal surgery. While temporary pain may previously have been experienced  (due to a medical procedure for one example), it has silently progressed into a newly developed condition of involuntary vaginal tightness so  intercourse or allowing anything else into the vagina is stressful, traumatic, unbearable and often impossible.  Here time is not a healer, as the condition becomes worse and worse during the passage of time.

Over time vaginismus often worsens, because the experience further increases the duration and intensity of the involuntary PC muscle contraction. The severity of secondary vaginismus may escalate so that sex or even penetration is no longer possible without great difficulty. Some women will also experience difficulty with gynaecological exams or tampon insertion. Vaginismus can also impede a woman’s ability to experience orgasm during intercourse, as any pain will abruptly terminate the arousal build up towards orgasm. 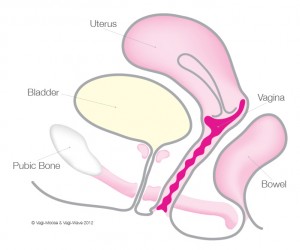 Once triggered, the involuntary muscle tightness occurs without conscious direction; a woman has not intentionally “caused” or directed her body to tighten but she cannot simply make it stop. At this point a women feels there is nothing else she can do other than suffer in silence and avoid any situation that will cause the cycle to begin once more. In other words she dismisses from her life, intimacy as well as routine medical checks, the latter of which can have detrimental effects on her health and well being.

In essence Vaginismus is controlling her  – and will continue to do so until she does something about re-programming her subconscious to eradicate the embedded negative commands she has unintentionally instilled within herself.

With Vagi-Wave women can easily gain back that control by following the 21 night vaginal training programme. Now you too can be amazed by the power of the Vagi-Wave and the science behind it’s development.

Imagine a new command being effortlessly imprinted in your subconscious , well now there is no need to imagine, all you have to do is invest in the Vagi-Wave and you too can be amazed with how simple it is to gain control today ready for your tomorrows.

Here is a list of  some of the common symptoms of  Vaginismus  (for further information read our topic on Vaginismus) :

► Unable  to use Tampons or Menstrual Cups

► Fear of Smears and Examinations

► Unable to Consummate/ Have Sex due to – fear, anxiety or culture

► Clamping Shut or Bearing Down to avoid Penetration