What it Works With

The most effective method of preventing cervical cancer is through regular cervical screening which allows detection of any early changes of the cervix and for younger women the HPV vaccination can help prevent 70% of cervical cancers. Cervical cancer is largely preventable and, if caught early, survival rates are high.

There are usually no symptoms with abnormal cells (in their pre-cancerous state) and sometimes also no symptoms with early stage cervical cancer. However, there are some recognised symptoms associated with the disease. These include :

If you are experiencing any or all of these symptoms or are concerned about any new symptom you should make an appointment to see your GP as soon as possible. Remember, these symptoms can be associated with many other conditions that are not cancer related. You won’t know if you bury your head in the sand  – not a good idea – because early detection (if you have the start of cervical cancer) is vital, yes vital, no ‘ifs or buts’, so don’t sit on it, get to your doctor and deal with it now before it is too late. You do not want to be hearing words like ‘ if only you had come sooner’ from a  doctor or an oncologist. Now is the time to put yourself first in the interest of yourself and those you love such as family and friends.

Not all women diagnosed with cervical cancer experience symptoms, this means attending regular cervical screening is even more important. As cancer develops, it can cause further symptoms such as :

Now when you read the following ‘stage descriptors’ you will naturally understand how important it is to go to that smear/pap appointment, because if anything causes concern, you really only want to be in ‘stage 1a/ 1b’ . Yes that does mean facing that smear/pap appointment, there is no fudging it, pretending that appointment does not exist is irresponsible and can have terrible consequences on you and your family and friends.

The appointment only goes away if (a) you ignore it, cancel it, stay in denial telling yourself  ‘it won’t happen to me’ or (b) attend and face it head on knowing this appointment is to keep you healthy, be honest you know  (b)  really is the only sensible option.

When you use the Vagi-Wave and follow the 21 night vaginal training programme you will be amazed as you notice a change in your attitude. You realise that you can effortlessly attend that appointment, because you will come to view such appointments as no different to going to the dentist for a check up.

Hopefully the more you read the more you will become aware that smears/paps are not there for when you have cervical cancer they are there to detect anything and put it right before something becomes worse or progresses to cervical cancer.  It is this simple: go to the appointment because it will help detect anything in the early stages and lessen medical intervention compared to the medical intervention that will take place if you really have left things to chance or the last minute. Find the time for a smear/pap appointment because if you don’t you may well have to find even more time because you require extensive medical care, or worse you may hear the words ’there is nothing we can do’.

Now imagine a product that when used effortlessly over 21 nights  puts you in control so you can and do attend that appointment. No longer do you  have to imagine such a product because Vagi-Wave is here, all you have to do is order now and follow the programme.

The process – called staging – is often the ‘wording’ used by specialists to help plan treatment. The following stages are used to describe cancer of the cervix: 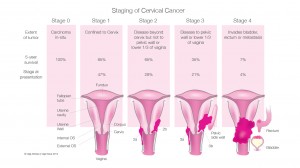 “Unlike many cancers, cervical cancer is a largely preventable disease.

A woman can control her risk of developing the disease by being screened regularly.

Any abnormalities that might be found can then be treated in order that they do not go on to develop into cancer.

Where a cervical cancer is found through screening, it is usually at a very early stage where treatment has a greater chance of success.”